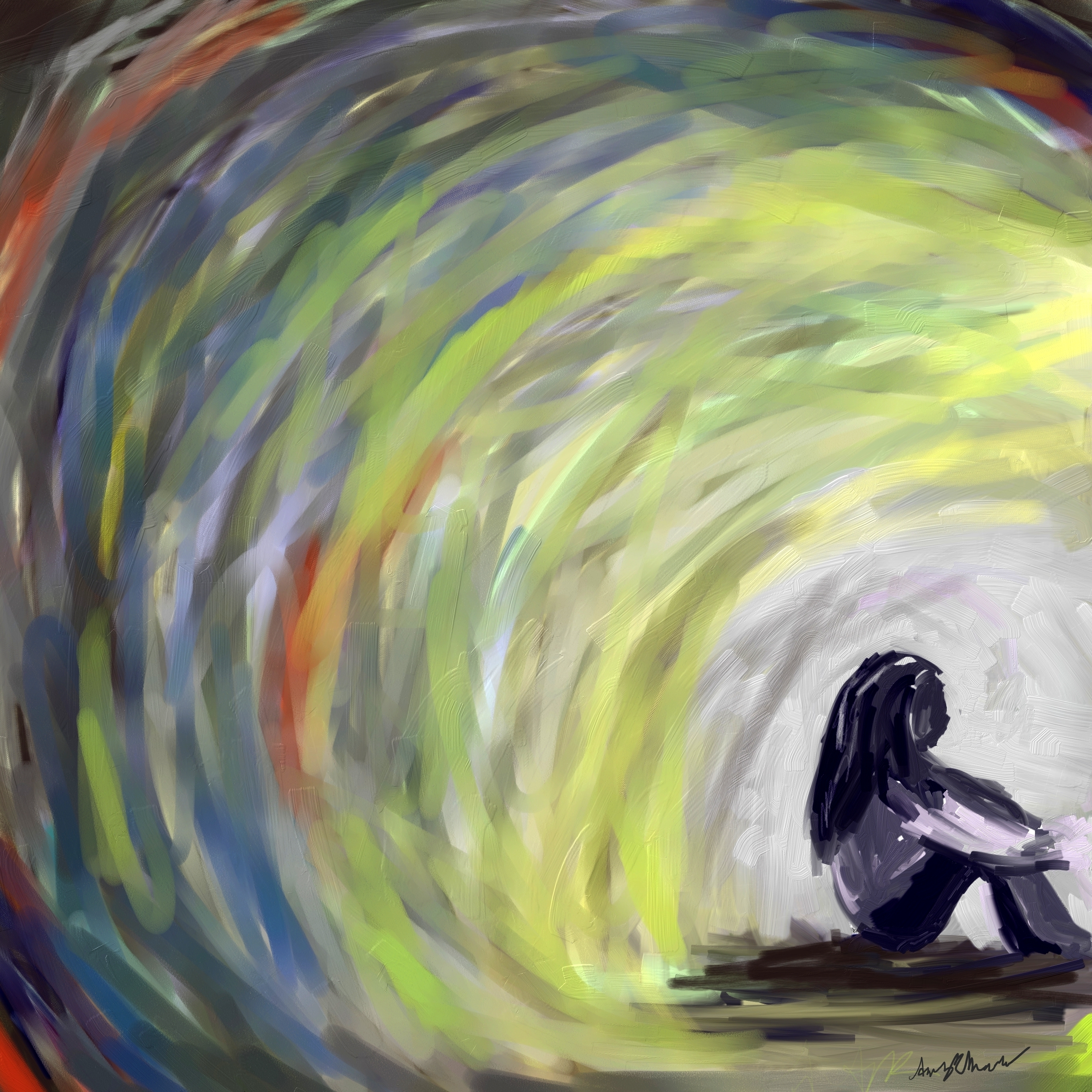 What is Major Depressive Disorder?

It is inevitable that there are some distressing events happened in our life, and it is normal to feel down sometimes. Yet, it could be the symptoms of mood disorders such as depression if the overwhelming preoccupation occupies most of our life. Depression can be classified into various types of depressive disorders according to its development and duration. Major depressive disorder is one of those that warrant clinical attention.

People who suffer from major depressive disorder present their depressive mood most of the day and lack interests in previous favourite activities for more than 2 accumulative weeks. They may also have insomnia or hypersomnia, significant weight gain or loss due to changes in appetite, psychomotor agitation or retardation and fatigue or loss of energy nearly every day. In the cognitive aspect, they could have feelings of worthlessness or excessive guilt, diminished ability to think or concentrate and indecisiveness. Severe depression will cause significant adverse impacts on both physiology and psychology. For examples, maladjusted eating or sleeping will deteriorate body functioning; in psychological aspect, it may develop into other mental illness, such as anxiety, hallucination and delusion etc. They may even have recurrent suicidal attempts with or without a specific plan. Therefore, this illness has a notably high death risk.

There has been more than 1.5 billion people worldwide and more than 300 thousand people in Hong Kong suffering from different types of depressive disorders. The risk of suicidal attempt of people with depression is 4 times more than people without the disorder. World Health Organization (WHO) has anticipated that depressive disorder will become the ‘No.1 Killer’ in the world in 2030. Therefore, we shall confront the depression problems as soon as possible.

Some people thought that individuals suffering from major depressive disorder are all due to their personality of being pessimistic and narrow-minded, and all the mood problems could be solved once the patients develop acceptance and become more open-minded. In fact, the causes of the disorder could be heredity, physiological maladjustments, neuroticism, unpleasant experiences in childhood and heavy stress in life. Patients may try very hard but still are not able to get rid of being depressed. Medical and evidence-based psychological treatments can truly help them from the shadow.

Sadness and other types of emotions are inevitable throughout our life. Sometimes it may be cathartic and benefit our soul. However, we shall learn how to cope with different types emotions. Otherwise, we cannot enjoy our wonderful life if we are constrained then. If you have found any people around you suffering from emotional problems, please don’t hesitate! Only seeking medical and psychological help can prevent the problems to worsen and tragedies to happen!

What is Generalized Anxiety Disorder?

Individuals with Generalized Anxiety Disorder show excessive anxiety and worry about a number of events or activities for more than 6 months. They find it difficult to control the worry and they have at least three of the following symptoms:

Meanwhile, they may show other physiological symptoms such as trembling, muscle aches or soreness, sweating, nausea, diarrhoea, accelerated heart rate, shortness of breath, dizziness and headaches etc. The anxiety, worry, or physical symptoms cause impairment in social, occupational, or other important areas of functioning. The worrying also impairs the individual’s capacity to do things effectively and wastes too much energy.

People in all age groups, even children, could be diagnosed with Generalized Anxiety Disorder. The prevalence of the diagnosis peaks in median age, and females are more likely to experience this illness than males. It is estimated that 4% of Hong Kong population, that is approximately more than 200,000 people, suffer from Generalized Anxiety Disorder. The earlier the morbidity in individuals’ life without appropriate treatments, the more comorbidity they tend to have, such as other anxiety disorders and depression, and the more impaired they are likely to be.

One-third of the risk of experiencing Generalized Anxiety Disorder is genetic. Temperamental and environmental factors are also associated with the mental illness. Individuals being neurotic, harm avoiding, having experiences of childhood adversities and their parents being overprotective are possible factors leading to the development of the disorder.

It is normal to have any emotions. What we need to make sure is that we are not influenced adversely by emotions in life. Some may say that being anxious easily means having a strong awareness of dangers and risks. However, it is not necessarily a good sign when this awareness gives us a burden in life and preoccupies our mind. When it develops into a psychological problem, seeking clinical help as soon as possible is the best solution.

What is Panic Disorder?

A panic attack is a mysterious and unthinkable thing for many people. When it comes, patient will experience an abrupt surge of intense fear or discomfort. Panic attacks occur recurrently, unexpectedly and irregularly with symptoms such as palpitations, sweating, trembling, sensations of shortness of breath or smothering or even having feelings of choking, chest pain, nausea, dizziness, chills or heat sensations and paraesthesia. Patients may also have feelings of derealization, fear of losing control or dying. A panic attack is not attributable to any bodily malfunctioning nor physiological effects of a substance. Being different from other anxiety disorders, it is also not caused by specific objects or situations. However, it could develop into other mental disorders if it is not well managed.

Panic disorder does no actual harms to our body. Nevertheless, the anxiety and stress it brings us could greatly harm our psychological well-being if we only have a smattering of the illness and hide it for fear. Not knowing the illness well and the cause of the symptoms, many patients misunderstood that they might suffer from a chronic and serious disease, which is even still an unknown to doctors. Their big concerns also bring them a big distress.  In their social life, they could be afraid of being embarrassed and criticized for their uncontrollable symptoms so they would reduce or even stop all social activities. In order to minimize or avoid panic attacks, patients may avoid physical exercise and going out alone, and restrict usual daily activities. Some of them even attempt to excessively use drugs and alcohol to control panic attacks. This is definitely an unwise idea and could develop into drug and alcohol abuse problems.

Indeed, panic disorder is not a rare illness in Hong Kong. According to a survey done by The Chinese University of Hong Kong in 2002, there has been 120 million adolescents and adults suffering from panic disorder. The number of female patients has been a double of the number of male patients. The population has kept growing in the previous decade. It implies that there have been more and more patients with this illness we should pay more attention to in Hong Kong.

Our body and psyche are inter-related. Both of their well-beings are vital to us. Therefore, as a metropolitan, we shall not only mind our bodily fitness, but shall also pay attention to the messages our psyche brings to us via our body.

What is Social Anxiety?

People suffering from social anxiety disorder will have feelings of marked fear or anxiety about one or more social situations when they are exposed to possible scrutiny by others. Examples include having conversations with others, meeting unfamiliar people, eating or drinking under observation and performing in front of others. Although patients may understand that the social situation and the sociocultural context do not cause any actual threats to them, they still fear that they will be negatively evaluated, humiliated or rejected by others due to their anxiety symptoms. Therefore, they prefer not to attend the social situations which may provoke intense fear or anxiety. The fear, anxiety and avoidance could last more than 6 months and bring them significant distress and impairment in social, occupational and other important areas in life.

People with social anxiety disorder may be shy or withdrawn, inadequately assertive and excessively submissive. They may also participate in discussion less, show overly rigid body posture and speak with an overly soft voice in conversations. They may prefer jobs that do not require social contact and live at home longer. They may also delay marriage and having a family. Some patients may be on self-medication with substances, such as drinking before attending to a social situation, in order to curb the desirable anxious emotions. It is not only an awful idea to cope with the disorder, but may even develop it into more serious mental problems.

There are around 3.2% of Hong Kong population suffering from social anxiety disorder. Adolescents and adults are the major groups of the illness, and higher rates are found in females than in males in the general population. The cause of social anxiety disorder may be related to individuals’ experience of being humiliated or embarrassed in the past.

Having a healthy social life is very important for human’s well-being. For those who are suffering from social anxiety disorder, the joys of interacting with others can only be regained if the social anxiety problems can be discovered as early as possible and appropriate treatments are given accordingly.